I always said the Ides of April were much worse than the Ides of March–it is, after all, the day I was born!  But now, it’s also the day my nephew was born, and this year (as he turns three) it will also be the day my niece will be born!  Since I’ve already given them as gifts, I have these two (poor) photos of the most recent blankets that I finished for her.  So much fun! 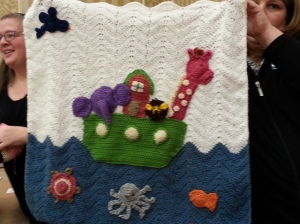 This was the first one I finished.  It looks a little more crooked than it really is, but I didn’t take the photo.  I’ve never done anything like this, with crocheted appliques.  It was fun!  So much so, I did another: 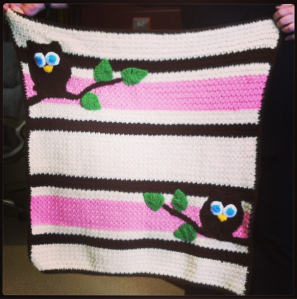 This photo was taken by a girl I work with who is obsessed with owls.  I still need to block it, but I’m thrilled with how it turned out.  So cute!

From a conversation at lunch today, when everyone present was ranting about their mothers:

I mean, come on.  Every Southern girl knows that either one of those phrases is enough to guarantee a good tale, but when both of them are used?  In conjunction with one another?  Look out!

The only problem was that I was sitting right next to my own mother, so I was limited in my participation levels.

So it was 102 degrees outside today, with a heat index of another seven degrees I think.  So what did I do?

Worked outside all day.

Today was a fund raising golf tournament for Prevent Blindness.  I have worked it for six or seven years now, and it’s a fantastic cause.  I would have gone regardless.  But still, all told, it was hot.  Very hot.  Hot enough that it makes you wonder if you forgot to ask for forgiveness for something.

Over the years, we’ve had days that were horribly cold around 40 degrees, last year the tournament was called because of violent thunderstorms, evidently one year before I started there was a tornado that came through . . . and this year it was just dang hot.  No breeze, no clouds, just sun and lots of heat.

But all told, the auction went well and there were several auction items.  It was a fun event, and I’ll see them next year!

So today at church I was waiting for the sermon, only to not get one. We got a lot of songs, a lot of praising, and then instead of a sermon we had an “interview” with John. He is on furlough until the middle of July. He, his wife, and three kids run a Christian school–in the Gaza Strip.

Listening to this man, this local boy that is about my age, I was just floored with how much this one person can and has done. The first year the school was open, there were 67 students. 66 were Muslim, 1 was Christian. The stories this man told about his kids at the school and the things that they were doing were truly inspiring. From the compassion shown to these children to the difference a random act makes it is just amazing that the things God does over there has such a maximum impact.

I really enjoyed the service today. No ‘do this, not that’ sort of sermon, but I’m still thinking about it 12 hours later. I wish this man and his family well when they return next month. They need all the protection that they can get from God and his warriors, and I look forward to hearing of the great things that they have been able to accomplish when he comes back on furlough again in four years.

So today was the hottest day of the year. I don’t do hot weather, that’s a given, yet for some reason a few weeks ago I decided to sign myself and B up to cheer at the Special Olympics for the tennis matches. The AC must have been off at work that day and caused my brain to malfunction.

So 100 degrees outside, and we went to watch the SOs. We had fun! We got lost, even on campus, and only got to watch two games between two girls that were actually roommates for the event. Given that one of them had never played singles before–she was supposed to play doubles and instead they messed up and put her in singles–she did a great job. And B, bless her, didn’t quite get tennis etiquette. “Ssshhh!” became my favorite word. But the girls did a great job, we had fun, and we even got out a bit early.

When we got home, my next door neighbor was finishing up her yard sale, so we joined her out there for awhile. Hot as hades, but in the shade with the fan blowing on us it wasn’t that bad. We had a visit, then realized that our slumber-party-that-isn’t was starting in two hours. So run home we did.

The it was off to C’s, where her husband, bless his heart, was conned into cooking burgers for the six of us with the understanding that he could then play poker all night. Made him happy. C, A, V, H, and B showed up too, and the six of us ate a ton, watched Juno, and just had a blast. How sad is it, though, that I then am home by 12 because I’m too tired to stay up?

Still, it was a fun day. Tomorrow I’m looking forward to church and then chilling out at home for awhile. Might catch a movie, might not, but it should be fun!!

Hope everyone else had a great weekend, and stay cool!

So the ‘write something every day for 60 days’ project is almost finished.  So far I have 55 posts, including the one that I wrote for today.  But today’s is private, and I just don’t have it in me to write a whole bunch more.  So I am taking today for me, not for the general public.

I am sitting in my living room at 130 on a Friday, the door open, the TV on, and feeling incredibly guilty because I’m not at work.  It isn’t like I’m playing hooky or anything, I’m billed in as taking 4 vacation hours so that I can attend a family reunion this evening.  I’m not even busy at work, it just feels weird having the rest of this beautiful day off while everyone else is working.

I really do need to get over my guilt complex issues and just say to hell with it.  I know this.  Easier said than done, though!

I’m off to clean house, shower, and pack before heading west!  Have a happy Friday!

So having dinner with H tonight I got to get the update on the divorce situation.  I was good friends with both her and C, and worked for C at several locations over the years.  But since the separation a few years ago I just haven’t had the desire to remain in close contact with him.  I love him like a brother, always have.  But every single time I have seen him since the split he has insulted me, offended me, made me cry, insulted my friends, my family, and my character.  I just cannot take it any more, so I don’t go to any efforts to speak to him any longer.  I have heard from him exactly once in the last two (three?) years, when he called my office at 530pm on a Saturday in a drunken stupor and left a long garbling message.  I know he has complained to his sister that I have been letting him down as a friend, but after the last encounter I just couldn’t bring myself to go through that any more.

He blew a 0.16 on the breathalyser–twice.  That’s 2x the legal limit.  And he flunked the eye exam.

So today, H had to tell the kids that they wouldn’t be seeing their father for awhile because he was sick.  And the youngest, S, asked if that was why daddy was shouting and so mad all the time.  It just breaks my heart.  And H, bless her heart, has really held it together well for the kids.  I’m not so sure I’d be that good in her shoes.

I’m sitting in my recliner, typing away, and there is the most fantastic thunderstorm going on outside.  Only there is no rain.  Lightning, rumbling, heavy claps of thunder, and not a drop of water anywhere.  Still kind of cool, though!  Plus it made the temperature drop by several degrees, which I always like!  The thunder and lightning got heavy enough that I even had to get out of the hammock and come inside for the night.

So today I had to work up north at one of our satellite locations and lord almighty I was tired by 1pm.  Getting up at 6 just doesn’t agree with me.  Plus, I haven’t waited tables in about 3 years, and I have lost my legs!  I ran my rear off, trying to make sure that I was able to help as much as possible without getting in the way.  When things slowed down for a few minutes I realized exactly how much I hurt.  We had a good time, though, and L and I yapped the whole way home so that I wouldn’t fall asleep we were so tired!  I got home at 3, and thought I was going to pass out from exhaustion but I knew I was meeting H and the kids for dinner at that gastronomic delight, Cici’s Pizza.

We actually had a great time.  We were there for almost 2 hours, and each of the kids gave me a plant for my birthday.  I can’t wait to plant the lily in the front yard, but have no idea where to plant S’s zinnia that I won’t kill it.  And H gave me Othello, that great game from our childhood (and one I surprisingly don’t have).  The kids wanted to play, so I sat at the restaurant and played a game with each of them, to teach them the game.  Like I said, we had a great time.  Plus, hey, cheap date!

And if I don’t eat pizza for another six months, I think that would be just fine by me.

I didn’t sleep last night. I fell asleep on the couch around midnight, woke up around 2 and went to bed–where I laid, wide awake, until at least 7AM. I know it was daylight, and someone nearby was mowing the lawn when I fell asleep. That being said, I still woke up around 1030 in time to make it to church today, so I was very happy with myself.

At church, for the service that I attend, we have two regular pastors that kind of rotate sermon duties. Periodically, a third guy will step in and preach as well. All three are great guys, mid-30s to early-40s, but #3 has a preaching style that is not quite my taste when he preaches. While I respect every thing he says, he frequently has an air of “huh, how about that?” when giving the sermon as if there are more questions, more things that he couldn’t figure out. I always enjoy his sermons, just the other two guys usually leave me with more to chew on throughout the week. Today, the third guy preached, and for a change, I was actually interested. END_OF_DOCUMENT_TOKEN_TO_BE_REPLACED

I am all for sunshine-y days and the flowers of spring, the winds of change, the foliage of fall, and snow is a beautiful thing. But hot weather is not my thing. Let’s face it–in the winter, if you are cold, you simply add more clothes or blankets or find someone to snuggle with and provide some sort of insulation and/or warmth. When it is hot, you can only remove so much clothing before you’re pushing the public decency laws. And trust me. Seeing me in shorts and a tube top would not be a pretty sight. END_OF_DOCUMENT_TOKEN_TO_BE_REPLACED